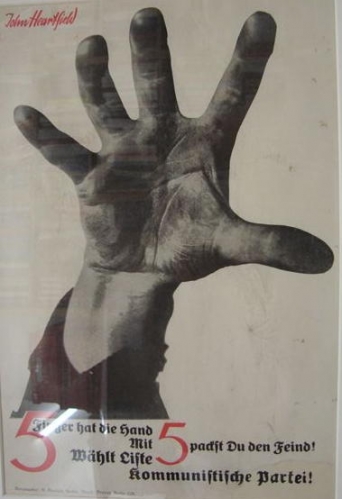 5 Fingers has the Hand.

Heartfield's most famous poster.
Because of the nature of Heartfield's work vehemently criticising the National Socialist Party and Hitler, possession of it became very dangerous and very few examples have survived.
Born Helmut Herzfield in Berlin in 1891, he changed his name to John Heartfield in 1916 as a criticism of the anti- British sentiment in Germany during the first World War. Together with George Grosz he was a member of the Berlin Dada group and the German Communist party. During the First World War Heartfield contributed work to Die Neue Jugend, an arts journal published by his brother Wieland Herzefelde. During this period Heartfield together with George Grosz claimed to have invented photomontage as indeed did Raoul Hausmann and Hannah Hoch. He went on to do some powerful satirical work for AIZ with savage and humorous attacks on Hitler and the National Socialists. So strong were his photomontages he had to flee Germany escaping arrest by the Gestapo in 1933 and relocated to Prague where he continued work for AIZ now located there. In 1937 Germany threatened to break off relations with Czechoslovakia unless an exhibition of Heartfield's photomontage was closed down. He was stripped of his German nationality and escaped to London where he remained until 1950 before returning to East Germany where he became a professor at the German Academy of Arts in Berlin in 1960. He died in Berlin in 1968..