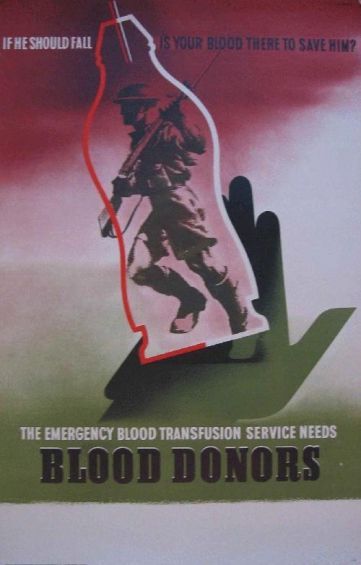 The Emergency Blood Transfusion Service used this poster to encourage volunteers in England to give blood. The poster reads “If He Should Fall Is Your Blood There to Save Him?”. The vast numbers of casualties during the Second World War meant there was a constant demand for blood supplies for the then quite new technique of storing blood for transfusion in blood banks. By 1944, there were 900 centres set up for blood donors.

The Emergency Blood Transfusion Service also collected blood to help civilian casualties of air raids. The first British blood bank had been set up in Ipswich, England, in 1937, but it was not until 1946 that the National Blood Service was established.

This poster was designed by Abram Games (1914-96), a graphic designer who was appointed as official war poster designer in 1942.